Skip to article content
articles
▶  categories
Clickbait Trash
Raging Rebuttals
The Secret of My Success
Vapid Consumerism
about
contact
A seeded hoagie roll from this recipe with mortadella, sharp provolone, red onion, shrettuce, dijonaise, and pickled hot banana peppers.
Photo: Joe Rosenthal
The Secret of My Success
How to Hoagie Roll
And they say that a hoagie can save us—I’m not gonna stand here and wait.
By Joe Rosenthal March 03, 2020, updated May 22, 2020

My goal with this recipe was to make a hoagie with a light, crispy exterior and a very soft, fluffy and flavorful interior. You may have different goals, and that’s OK, I’m sure you’ll find happiness somewhere else.

I suggest pairing this with pork butt confit, broccoli rabe, and sharp provolone. Cook the pork for 22 hours at 165F in a water bath or on your stove-top (induction cook tops can be useful for something like this). Salt the meat and cook in some lard alongside garlic, orange, maybe oregano or whatever other else you feel appropriate. If you can’t get the exact right cook temperature, the key is for the collagen in the meat to break down into gelatin. The meat should be extremely soft and tender, and it ought to jiggle, like jello (again, it’s the magic of gelatin).

Wait for it to cool, pull it, and then you can freeze it, and fry hard with some oil to serve for an extremely tender pork with a crispy crust (salt it to taste at the fry stage—it needs a lot of salt). The result is essentially carnitas meets a roast pork sandwich. And truth be told, I use the same pork precursor for these sandwiches and carnitas both. For the broccoli rabe, chop it up a bit (those big pieces of broccoli rabe are no fun), sauté with some salt, minced garlic, and red pepper. 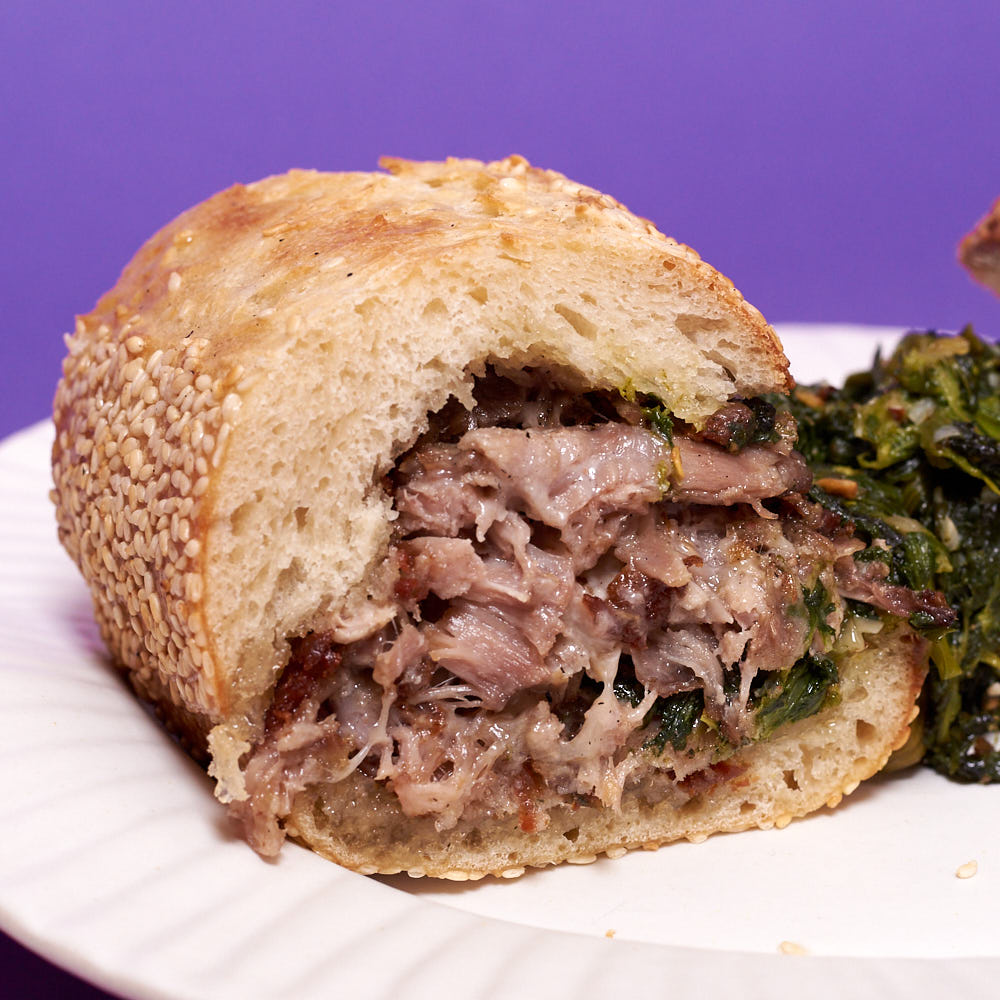 Pork confit, sharp provolone, and broccoli rabe on a seeded hoagie roll. Just like Wawa, you can scoop your hoagie rolls, too.
Photo: Joe Rosenthal

If you hate sandwiches, I suggest making this recipe, cutting through the resulting rolls lengthwise, and eat it as bread. It pairs especially well with the butter in my gift guide. You can also turn the rolls into toasts—fresh avacado, sea salt, and Calabrian chili oil make an excellent toast topping.

A scientist and breadbaker friend, Sarah, thoroughly documented her process through this hoagie roll recipe in her Instagram Story, and I recommend checking it out. Please ignore everything that contradicts the exact wording of this recipe.

Everything but the semolina, rice flour, spray bottle, and lame are in the gift guide. You don’t need to buy the exact items from the gift guide to make this recipe, but it’s a good starting point for what you need.

You can bake this hoagie roll on a baking sheet in the oven and skip the baking stone or steel, but the bake time for the roll will be longer, and the resulting roll will have a less aggressive rise due to the lack of energy being dumped into the bottom of the dough while baking. 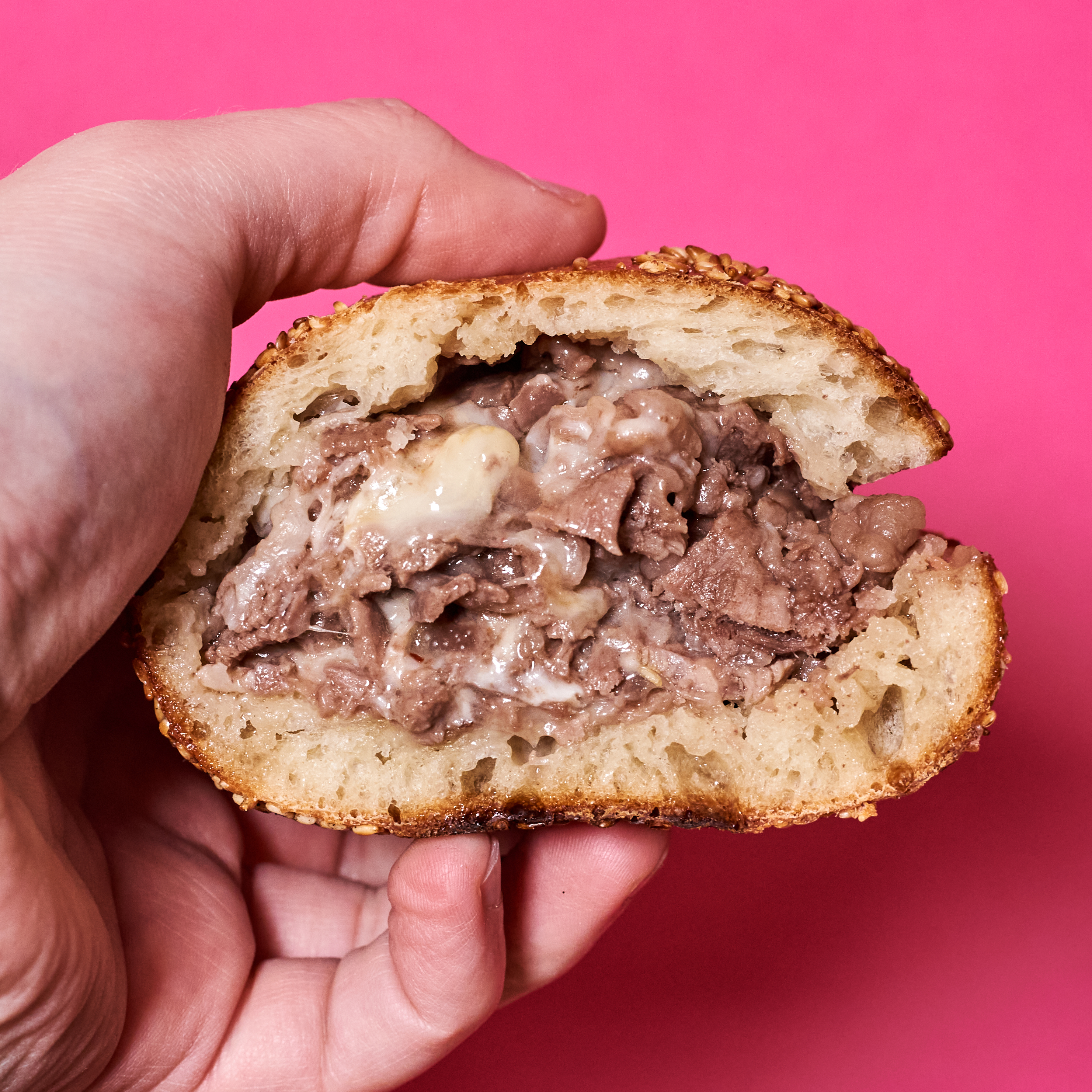 My lame is fine, and you can buy that. I have not tested a bunch of lames. I don’t know that it really matters. If you don’t have a lame, you probably will want to get one, but a sharp knife will do in a pinch. Regardless, slashing is critical for letting the dough expand in a controlled manner.

And the spray bottle is my favorite way of keeping the oven (and dough) moist, which gets you the best rise and crust quality. You can try other methods, but they are not supported. Follow the spray regimen outlined in the end of this recipe.

King Arthur bread flour will get you a roll that has a tough, chewy exterior, the antithesis of what I wanted out of this recipe. Use King Arthur AP flour or bleached bread flour if you have a choice .

As far as the yeast goes, this recipe was developed with SAF Instant Yeast. You can buy it at Sur La Table, some Restaurant Depot locations, and it’s on Amazon. Once the package is open, I throw it into a freezer bag and store it in the freezer. You can use it straight from frozen without issue—it’ll warm up quickly enough. If you can’t get SAF Instant Yeast, buy some other “instant yeast” in the store. Instant yeast is not the same as active dry yeast, and I am not recommending the latter.

Since it’s customary to present a dough recipe in large quantities, this recipe four dough balls for 12-inch hoagies, at 400g of dough per hoagie. You can leverage the powers of mathematics to bring this down to fewer hoagies per batch, or make all four, bake them throughout the week, or bake them all, and freeze the ones you don’t eat—do not store breads or pizza in the fridge, lest you form disgusting retrograde starches that make the bread stale.

For kneading and shaping this dough, my preferred work surface is a freshly oiled and wiped (with food-safe mineral oil, which won’t go rancid) wood cutting board. If you follow the instructions of this recipe, the wood board should be very easy on which to work.

Mix the dry ingredients, stir, add the oil, and add the water. Mix until vaguely together. Knead by hand until almost smooth or throw into a stand mixer on “stir” for 10 minutes or so until nearly smooth. Do not use bench flour. Bench flour perturbs the recipe—power through it. Use your bench scraper to move the dough if it’s sticky.

If you’re kneading by hand, and the dough is too sticky, if the dough is more or less homogeneous, that is, all of the flour is incorporated, you can just invert a bowl over the dough and walk away for fifteen minutes or so. Do not cover the dough with a towel—it’ll stick, and you don’t want moisture to escape at this point. I’ve had very good luck with just walking away from stubborn doughs. If necessary, you can give the dough a quick fold and let it sit for another 15 minutes. Again, do not use bench flour. Do not use bench flour. Power through it.

Remove the dough from your bowl using a bowl scraper, and be sure to remove all of the dough. Place the dough on your working surface. Knead the dough a few times, and then cover the dough with your mixing bowl inverted over the work surface (let’s not needlessly dirty new containers). Wait 30 minutes to an hour (stick closer to latter if your house is cold), and then split into each hoagie-sized portions. Use your bowl or bench scraper to remove the dough from the work surface if it’s a little sticky. Do not use bench flour. Knead each portion briefly, and form a ball.

Place each ball into a lightly oiled container. Size the container so that the dough has some room to grow. You don’t want to use a completely airtight container, but a basic seal is fine. Place the dough in the fridge for one-to-three days. I’ve had it in the fridge for up to six days, and it was still fine.

I typically remove the doughs from the fridge before I go to bed, and then first thing in the morning, I shape the dough. I’ve found that in my approximately 67°F kitchen, it’s fine. If your kitchen is much warmer, you can take the dough out sooner relative to when you shape it, and drop the yeast quantity next time if you want to leave it out overnight. The key is for the dough to have warmed up fully by the time you shape it, but it’s very hard to over-proof. If you’re pressed for time, three-to-five hours at room temp should be enough time for the dough to warm up fully from the fridge (you may be able to get away with just two hours).

When the dough is ready for shaping, get a tea towel, and cover it lightly with rice flour, and put the towel aside for now. Take the dough, and on your bare work surface, flatten it and roll it into a 12-inch-long log (be sure to pinch any seams when you’re done). If you do a poor job of shaping it, don’t worry, you can re-ball and start over without much worry, because, you didn’t use bench flour.

The hoagie dough will need to rise after it’s shaped for two-to-three hours.

I preheat my oven to 500F on convection bake at this point with a stone on the middle rack of the oven. You’ll want to preheat an hour to an hour and a half prior to baking. I preheat after I’ve shaped the dough, so I don’t have to worry about hoagies again until l bake.

I prefer to bake one hoagie at a time, but do no more than two at a time.

Lightly cover your peel with semolina flour. Roll the dough onto your peel (carefully so it doesn’t fall on the floor) , and shake it a few times to make sure it moves freely.

Get a lame ready and dip the blade in water.

With the lame (or you can use a knife if you don’t have one), slash the dough vertically using the corner of the blade. Cut deep across the entire length of the dough.

Launch the dough into the oven, and immediately spray surface thoroughly with water.

For the first two timers, open the oven and spray the roll with water.

Bake for 12 minutes or until golden brown. In general, if you’re nervous about doneness for a bread, you can test the interior temperature with an instant-read thermometer. Approximately 200F is a good goal. For this recipe, once it’s golden brown, it should be fine.

When done, remove the roll, place it on a cooling rack, and spray lightly with water. Wait at least a half hour before cutting the hoagie roll.

When ready to serve, cut lengthwise with a good bread knife. Keep the roll uncut until you’re ready to use it. I prefer to cut almost all the way through, almost like a hot dog bun, rather than cutting the roll into two separate halves. The roll can then be scooped (if you so desire), folded open and stuffed.

Pork confit, sharp provolone, and broccoli rabe on a seeded hoagie roll. You can also skip the scoop, because, really, the bread is the best part.
Photo: Joe Rosenthal 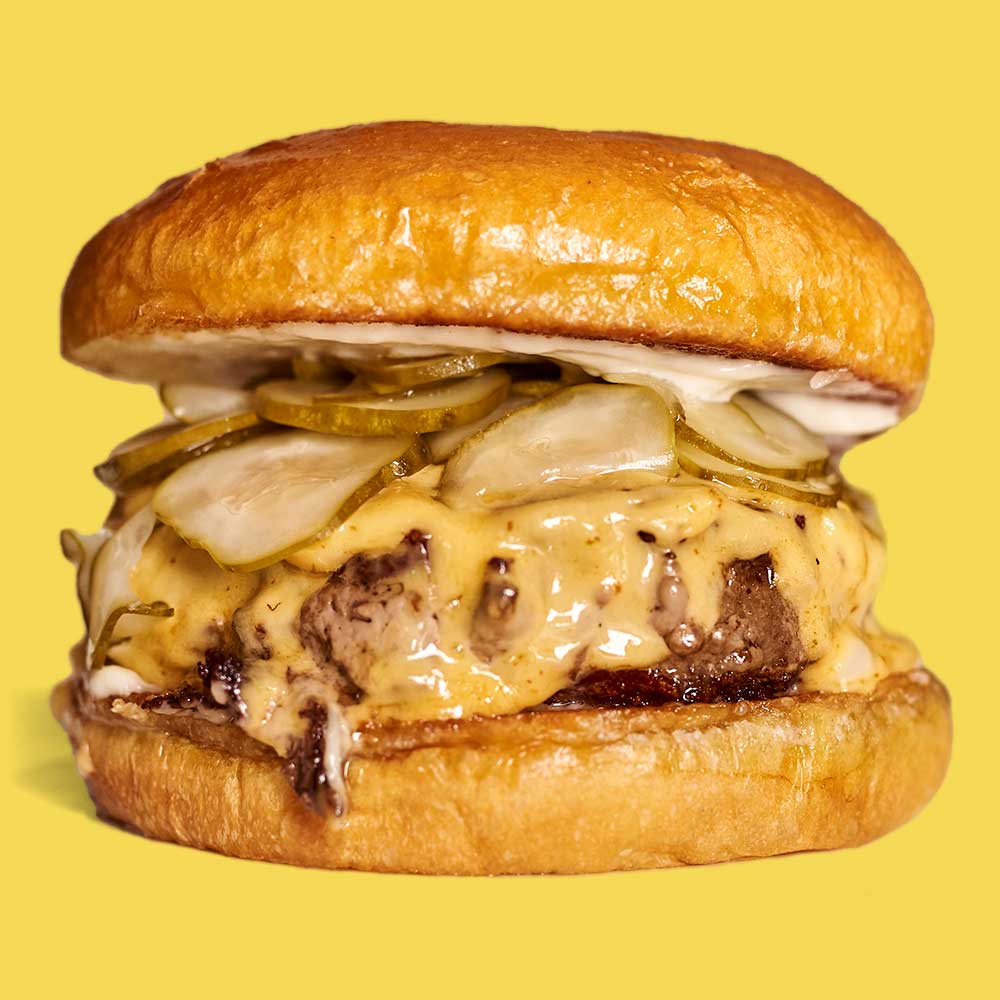 How to Burger Or: How I Learned to Stop Worrying and Love Mise en Place. 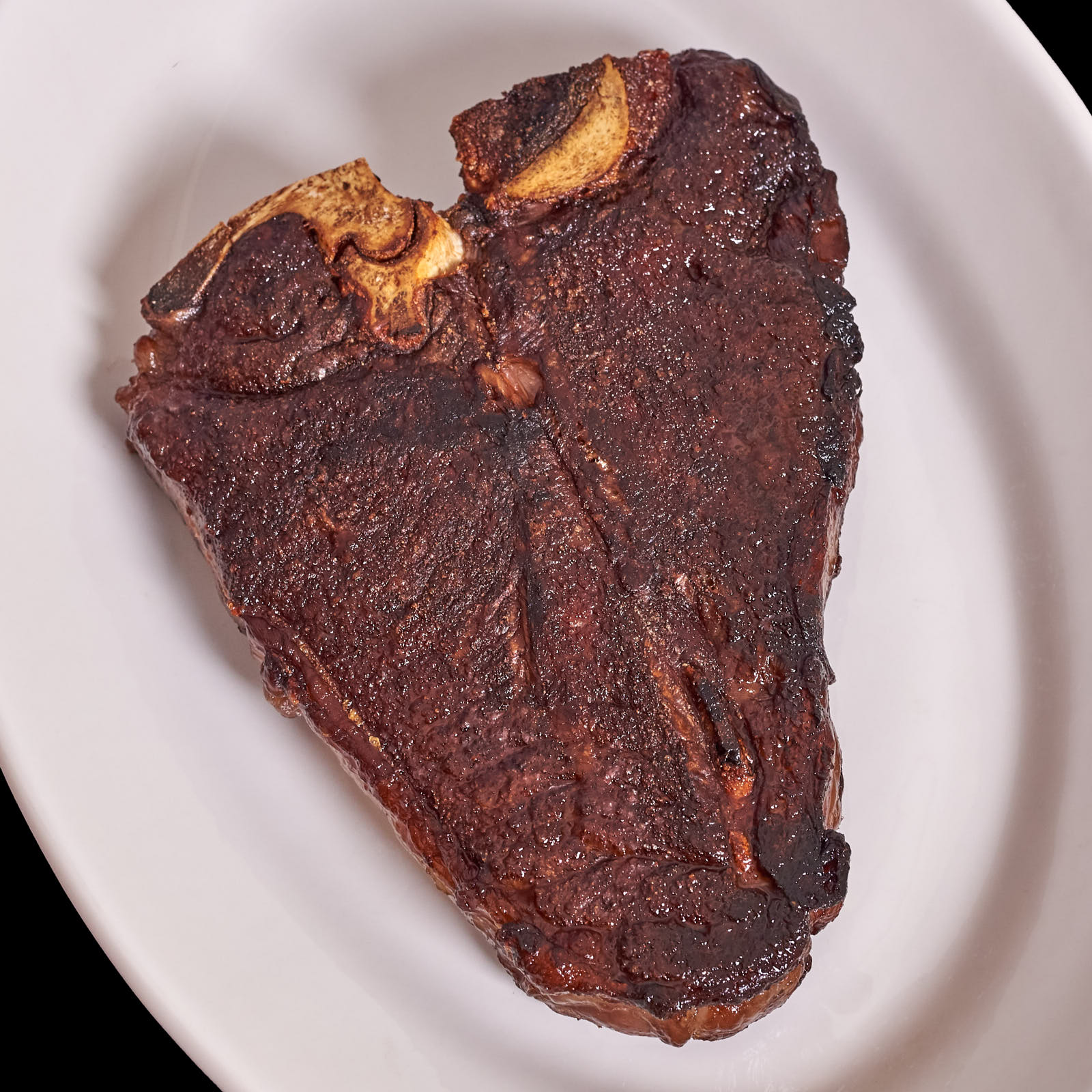 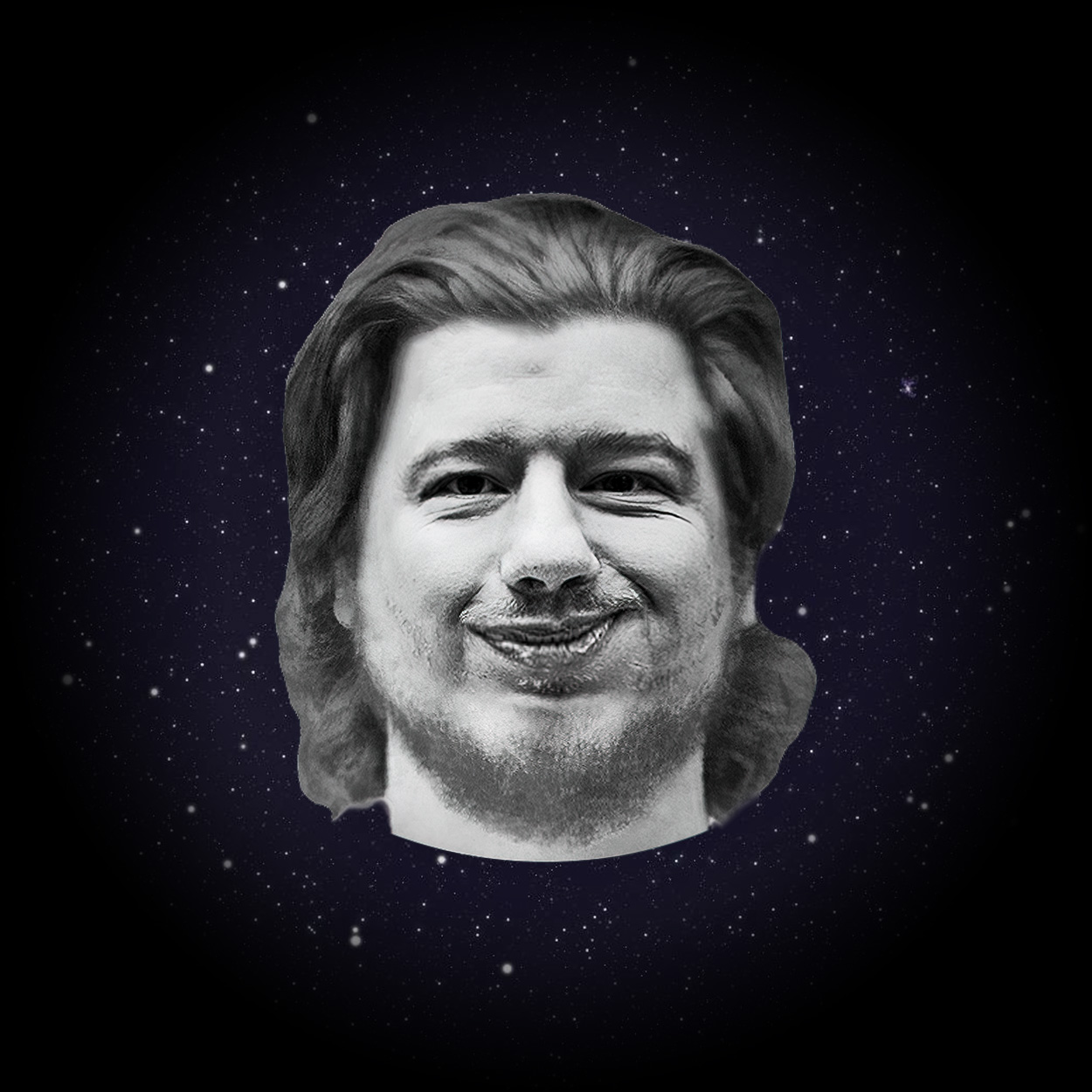