Fashion industry watch dog, Diet Prada, recently published an advertisement for Recho Omondi’s podcast, The Cutting Room Floor. Omondi was in the news last summer for her intensely antisemitic episode of the podcast. In the comment section for the ad, Omondi doubled down on her antisemitism, while Diet Prada filtered the word “antisemitism” from replies. Diet Prada eventually unhid the filtered comments some time after the filter was publicly called out and their comment section for the ad became inundated with accusations of antisemitism.

The antisemitic episode was an interview of disgraced Man Repeller founder, Leandra Medine Cohen. Omondi ranted about Jews and weaponized Medine Cohen’s Jewishness to perpetuate antisemitic canards and stereotypes. She used the phrase “Jewish American Princess” as a pejorative to attack Jewish women, referenced the debunked antisemitic trope that Jews were major perpetrators of slavery, flattened Jewish ethnic groups while conflating Jewishness and whiteness, and suggested that Jews are inherently wealthy and privileged.

The Cutting Room Floor presented an audio clip, which many assumed was of Medine Cohen speaking: “Jews were slaves too, but you don’t hear us complaining about it all the time.” But Medine Cohen was not in the clip, and the speaker was actually a comedian who wasn’t even Jewish. That section and the “Jewish American Princess” remark were both removed from the episode without any notice.

The story surrounding the antisemitic episode eventually reached critical mass, and Omondi did an interview with Chantal Fernandez in Business of Fashion. Omondi claimed, “…what I was trying to say was valid, but it didn’t matter because of the way I said it. It was really unfair.” That statement and her reaction to the claims of antisemitism in general felt like a justification more than an apology, and my “Diet Prada” story highlight on Instagram discusses Omondi’s antisemitism and her problematic response to claims thereof.

A screenshot of Diet Prada’s ad for Recho Omondi’s The Cutting Room Floor podcast, and my response to it. The comment was filtered at the time of the screenshot, and it was not visible to anyone besodes me and Diet Prada. (Instagram)

Just over a year after Recho Omondi’s antisemitic episode, Diet Prada posted their advertisement for her podcast on their Instagram. I commented, “it’s disappointing to see this ad for The Cutting Room Floor given Recho Omondi’s intensely antisemitic episode of the podcast,” and I posted a screenshot of my comment to my Instagram story. My followers had quickly told me that my comment was not visible to them, and it was clear that my comment had been hidden.

I made a series of replies demonstrating that comments containing the word “antisemitism” were being filtered in Diet Prada’s comment section. The video below shows a comment in which I wrote, “antisimitisn,” and the intentionally misspelled word was not filtered. Two comments that spelled “antisemitism” correctly were hidden.

A video demonstrating that several comments were made in response to Diet Prada’s ad for The Cutting Room Floor, and comments containing word antisemitism were hidden. (Instagram)

I rewrote my comment while avoiding the word “antisemitism,” and I replaced it with “bigotry… toward Leandra Medine Cohen and people like her.” Omondi herself responded to me, and she doubled down on her antisemitism and blamed Medine Cohen: “lol leandra was an actual nightmare.” Eventually that commented was deleted. 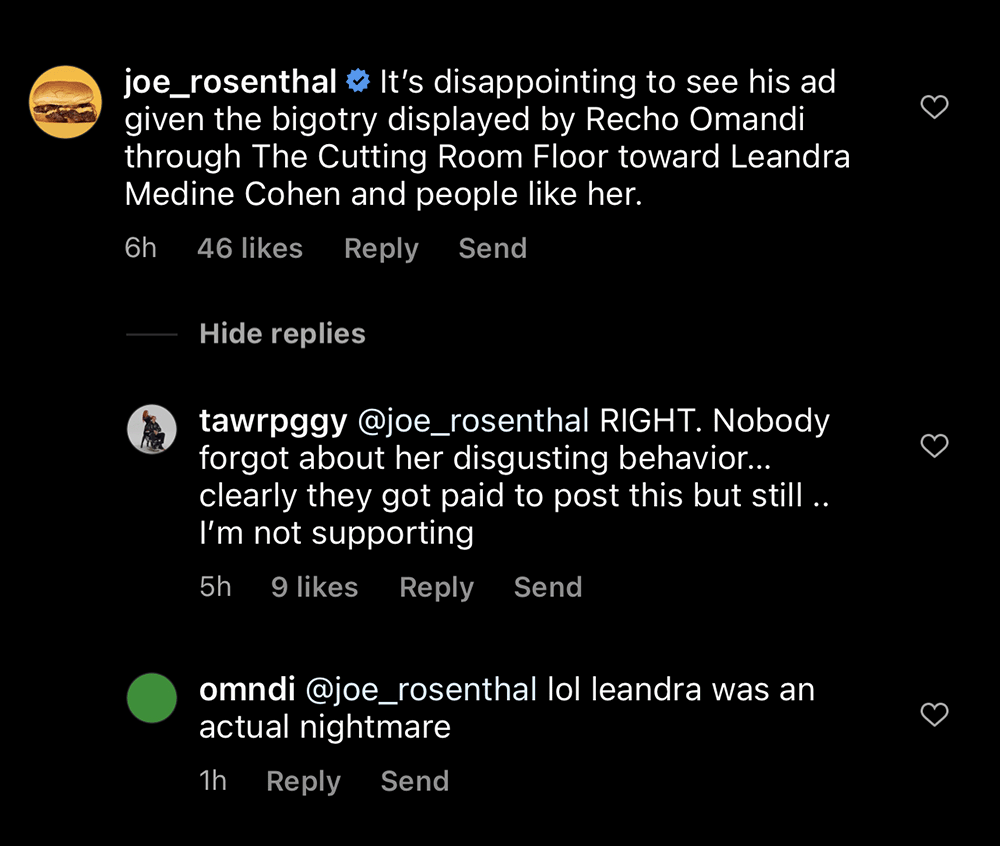 Diet Prada’s antisemitism filter made it difficult to talk about antisemitism, but I responded to Omondi and concluded, “you are responsible for that interview and your unethical and bigoted behavior throughout, no one else. Your comment here serves to double down on the harm that you caused, and it blames Medine Cohen, rather than yourself, for your bigotry. It’s gross that this is your response.” Omondi responded with an emoji, “😎,” and liked my comment. I assume it was an ironic like. 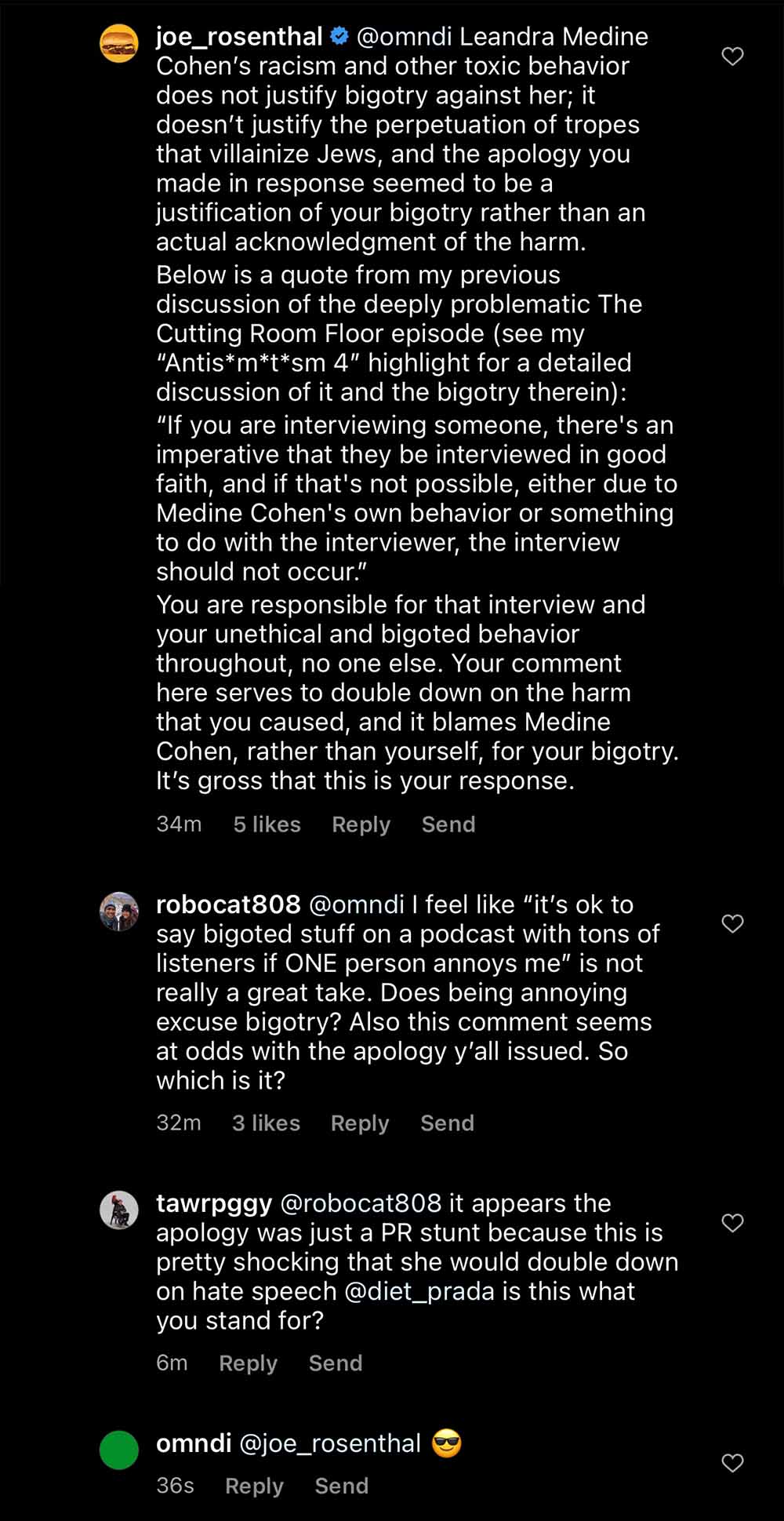 A screenshot of my reply to Recho Omondi and her response. (Instagram)

Tony Liu and Lindsey Schuyler, as Diet Prada, push for accountability in fashion in the context of cultural appropriation, racial inequity, and bigotry. Despite this, they are promoting Recho Omondi, who doubled down on her antisemitism in Diet Prada’s own comment section. They have not commented on Omondi’s renewed antisemitsm; the ad remains, and at the time of writing, a link to The Cutting Room Floor is at the top of Diet Prada’s Linktree.

No explanation has been offered to the Jews that they censored with Diet Prada’s “antisemitism” filter, and at this point, at least some of the filtered comments have been unhidden, without explanation, after public outcry. Liu and Schuyler have shown Jews that they will ignore them when they say they’re being harmed, and that talking about antisemitism is more problematic to them than perpetuating antisemitism. Diet Prada has willfully failed its Jewish following.

In Rachel Tashijian’s GQ piece, “Who Will Cancel the Cancelers?,” Liu and Schuyler addressed the subject of apologies after Diet Prada’s problematic critique of Kanye West’s partnership with Gap was widely criticized:

We all know how the typical Instagram apologies go… they’re pretty worthless to an audience that’s already made up their mind. There’s a tendency for people and brands to be too reactionary in their apologies and we could all benefit from taking the time to process and learn.

As much as an apology can be a perfunctory and performative gesture, it’s imperative that Liu and Schuyler hold themselves accountable by acknowledging their antisemitic bias and radically shifting their behavior.

That Diet Prada hasn’t paused at promoting someone with intense antisemitic bias, that they actively censored Jews, is disturbing in light of their social justice positioning. Antisemitism cannot remain exceptional to Diet Prada’s view of accountability. Liu and Schuyler must make an active effort to counter their antisemitism lest they remain entrenched in it. 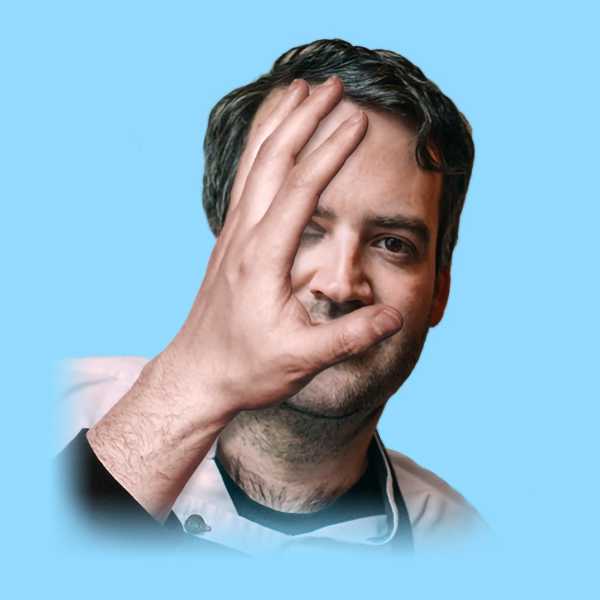 The Perpetually Problematic Matt Hyland The doxing of a critic's Tinder profile, Emmy Squared investor controversy—why you should think twice before eating at Emily Pizza and Emmy Squared. 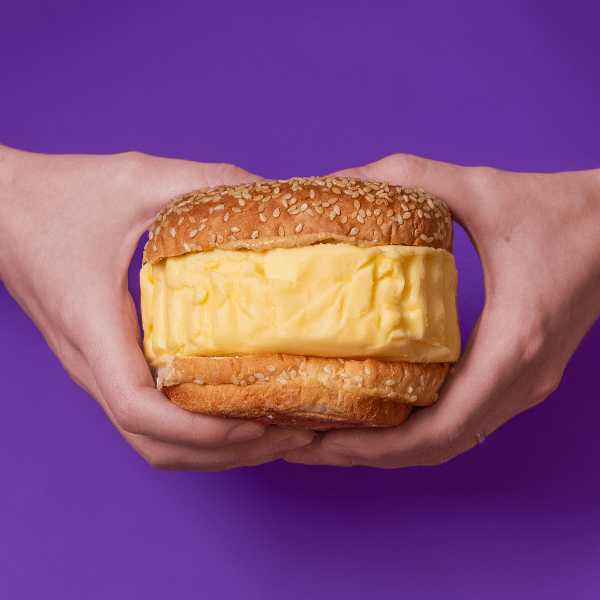